Here you find everything science communication related I do. Some of the videos are in English, some are in German.

For an introduction to the theory of Causal Fermion Systems visit the new website we set up recently.

A one minute video I did with Shane Farnsworth for the Veritasium Contest on YouTube.

Furthermore I am acting as a producer for the “Escaped Sapiens” podcast created by Shane Farnsworth.

An interview I did with Adam Ford down at the pier in St.Kilda on Science, Politics and Power.

A friend asked me to give a talk at their club in Melbourne.
When the EHT picture came out I was marveled by the fact that the 3 most significant developments in fundamental physics in the last decade are. “A Bump, a Wiggle and a Blob” so I decided to talk about that

The Bear Gravity Show: Breakthrough vs. Establishment – How a relationship influenced an academic career.

Science Slam SO36: A Walk on the Beach of the Dirac Sea (ENG)

Not exactly a Science Slam, but close enough. When I was working at my beach office Adam Ford came by to do an interview. It was a bit of an experiment where I tried to explain the basic ideas behind the new theory I’m working on. It was more or less a one-take so be gentle and take it with a grain of salt. As quite some time has passed since I wouldn’t a 100% support the interpretation of the theory which I give in the video. My current understanding has advanced but through that my interpretation got more blurry again, because I am not sure there isn’t a better way to look at all of this. Anyway, it is a fun little video so enjoy.

Science Slam SO36: The Fingerprints of Black Holes (ENG)

My statement at the pre-march pressconference in Washington. (ENG)

Here you find an interview about the march for science I gave the Max Planck Society before the march.

One of the many articles about the March for Science in Berlin. 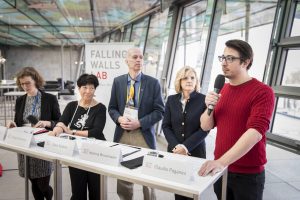